A body of work, figurative in orientation

Stroud Museum in the Park: five pieces were acquired for permanent collection in 2009. 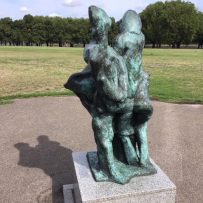 <p>Alan Thornhill’s sculptures have just been re-waxed by Chris Nash of Arch Bronze Foundry, in Putney.</p> 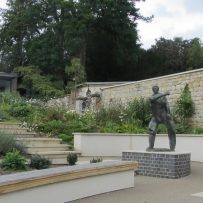 Thornhill’s sculptures ‘Summoner’ and ‘Punch and Judy’ are now installed in the walled garden at Museum in the Park,...

<p>Spirit in Mass – Journey into Sculpture, will be showing as part of …</p>

A substantial body of work, made in clay and figurative in orientation created over a 60 year period. Alan Thornhill’s work encompasses early pottery, portraiture, figurative sculpture and paintings as well as idiosyncratic groups of figures. His radical working methods embracing improvisation and the unforeseen have inspired sculpture students and produced a body of challenging work drawn, in part unconsciously, from personal and shared concerns of the late 20th century.

Spirit in Mass – Journey into Sculpture from Anna Thornhill on Vimeo.

Alan Thornhill’s sculptures have just been re-waxed by Chris Nash of Arch Bronze Foundry, in Putney.

Alan Thornhill Sculptures at The Museum in the Park, Stroud

Thornhill’s sculptures ‘Summoner’ and ‘Punch and Judy’ are now installed in the walled garden at Museum in the Park,...

Spirit in Mass – Journey into Sculpture, will be showing as part of …

Alan’s writings on the Quest for Authenticity

Alan’s writings on the Quest for Authenticity…

Spirit in Mass – Journey into Sculpture will be shown on…

Spirit in Mass – Journey into Sculpture

A 40 minute documentary available on DVD which charts Alan Thornhill’s unconventional journey into sculpture.               Spirit in Mass – Journey into Sculpture from Anna Thornhill on Vimeo.   “A very evocative piece of film-making which is a wonderful tribute to a multi-faceted artist and human being.” Carol Godsmark, Trustee Chichester Film Festival “Probably the most rewarding 40 minutes I have had in a very long time! Thank you.” Simon Mills FRSA Discovering himself to be by nature an improviser yet committed to the time-honoured language and sensuous values of sculpture, he devised a way of working which embraced spontaneity and the unforeseen. This approach has inspired sculpture...

A permanent installation of nine large sculptures along the River Thames at Putney, South London. A beautiful 1.5 mile riverside walk including parkland and piazzas replete with cafes and restaurants. A unique opportunity to see a collected body of work by Alan Thornhill in an urban setting. The trail was opened in September 2008 and was organisd by Putney Town Centre Partnership with Wandsworth Council. See the Wandsworth borough website for more details. [Show as automatic slideshow]...

ALAN THORNHILL – Sculptures, Drawings and Paintings A personal exploration of the creative process The Museum in the Park, Stratford Park, Stroud, Glos GL5 4AF Tel: 01453 763394 www.museuminthepark.org.uk Exhibition – Saturday 9th June to Monday 27th August 2012.   Read an article on Alan’s exhibition that appeared in ‘Stroud Life’, July 4th 2012.  This exhibition was part of the Cultural Olympiad and not only celebrated the work of an unconventional British artist and his 60 year connection with the Stroud District, but also offered cultural opportunities for all ages. Special events and workshops aimed to inspire and encourage creativity in adults, children and families, offering everyone a chance to experiment with creative...

My sculptures are concerned with the ordinary but diverse human predicament and stand, I hope, as a reminder of our shared humanity. They are improvised rather than pre-conceived and are built with randomly pre-formed non-representational shapes made in firmed-up coarsely textured clay, which is the material I have always loved to work with. The process is one of interplay with the material in which the intervention of the unconscious with its ambiguities and improbabilities is obediently heeded. Deliberately devoid of ‘initial idea’ my work is propelled by the process of improvisation. It evolves as an act of faith from an abstract into a figurative or at least an organic statement in accord with my...

Traces of an Artist’s Journey: An appraisal of Thornhill’s work

Alan Thornhill describes his sculpture as expressive rather than cerebral. Its images stem from his unconscious and his experience of materials rather than from concept or theory. This does not mean that he is not a thinking man or that a great deal of thought has not gone into the making of his sculptures. It means that he wants us, the viewer, to look at and experience his work directly, without necessarily resorting to the lens of art history or art criticism to do so.

Read More
We use cookies to ensure that we give you the best experience on our website. If you continue to use this site we will assume that you are happy with it.OkRead more